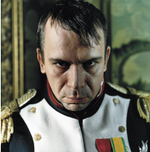 Hello there! My name is Dean. I am 42 years of age and I come from the United Kingdom. I am married with one daughter and a little Jack Russel terrier called Milly.

My interest in the Emperor Napoleon now spans a course of over twenty years, and it began when in my late teens I picked up a book by chance. This book was called, Waterloo, by Commandant Henri Lachouque. This book enthralled me with it's vivid tale of the Waterloo campaign. I marvelled at the epic nature of the struggle, the glory of the massed charges and the desperate attack of The Guard on Wellington's line. I asked lots of question's too: Who was this Emperor? What had led him to that fateful battlefield in Belgium? What had become of him afterwards?

I asked all these questions and lots more. I was now set upon a course to find out more on this extraordinary man, and I devoured any book I could get. Over twenty years later, my interest has never waned and my book collection is extensive! I've also found out during this time, that lots of books on the subject, depending on the bias of the author and perhaps their nationality, have conflicting views and can misinform the reader. For instance, an English author with patriotic pride, might well describe the Battle of Waterloo as a great English victory, whilst a German author might well say it was a German victory. The argument goes on, for as Professor Geyl says "History is indeed argument without an end" I cannot stress enough for anyone interested in Napoleon, to read many books and form your own conclusions. It is not enough to form opinions by one book.

One of the highlights of my life (I'd better not say HIGHLIGHT, as my wife will say with indignation, "What about the day we got married? !!) was the first time I made the journey to pay my respects to Napoleon lying beneath the dome of Les-Invalides in Paris. I recall it was a cool saturday morning and I was the very first visitor that day. I remember running to the dome after getting my ticket, for I wanted time alone if I could, to savour this special moment. The grandeur of his last resting place took my breath away, and I stood before his tomb in quiet contemplation of his life, as well as the journey through my own life that had led me to pay homage to the great Emperor.

I admit I am a confirmed admirer of Napoleon, and as such, I am aware that I can also be biased in my own views. However, I think that to deliver a unblemished portrait of the Emperor, does not do justice and I try to present a balanced view if I can, even if my own regard for him shows in my writing.

Outside of the Emperor Napoleon, I confess to having few other interests. I enjoy walking my Jack Russel through the natural countryside around where In live as I find that relaxing. I also like home cinema and I watch movies. My favourite films are of course to do with Napoleon and I enjoy the 1970 film, Waterloo with Rod Steiger as Napoleon. While not 100% accurate, it's a worthy film and the epic battle scenes look stunning on my widescreen television. I also like The Pianist, The Rocky films, (I like a good fight!) The Green Mile, Leon, Taken and Gran Torino to name a few. My favourite actors/ actresses are Liam Neeson, Clint Eastwood and the actress Jamie Murray from the Hustle television series. Lastly, I confess to having a wander down to my local tavern now and again to relax with a wonderful pint of Guinness!

Retrieved from "https://napoleonbonaparte.fandom.com/wiki/User:Letondu?oldid=7747"
Community content is available under CC-BY-SA unless otherwise noted.