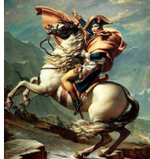 It's so good to see you back too Charlie!

I need to get on and move on with the rest off the 1814 battles as it looks incomplete and thats not good. I get a little sidetracked writing on the Waterloo Campaign. Thing is, I will ask a question.... Is my Waterloo Campaign write up getting too detailed or bogged down in details that are not relevant? Your feedback and guidance is always appreciated.

Oh yes! Next year I have booked a trip to go to the Waterloo Battlefields in Belgium. It's a five day trip and I will be touring the campaign in the order as it happened so I'll go to Quatre Bras and Ligny first, then to Waterloo and Wavre. There will be a guide and I'll be with some people who are like minded. I will walk the fields from both sides of the battle positions and basically in the order the actions were played out. Really excited about this trip!

I hope you are well and your studies are progressing. I am happy to write here on this great site you have constructed.

About your book- Napoleon the Path to Power. No, I have not read that one, but I will look it up on Amazon. I am reading Napoleon- his Wives and Women at the moment. It's a book which reveals some interesting facets of his character in his relationships with women. Very interesting read.

Quotes... Yes, I understand, BUT... I don't think it looks right for the quote and speaker are separated on different lines. They don't look like the belong together.

Retrieved from "https://napoleonbonaparte.fandom.com/wiki/User_talk:Napoleon_of_France?oldid=7792"
Community content is available under CC-BY-SA unless otherwise noted.